Sometimes its paramount for you to record a onetime event , even though your gopro battery is low – the question now arise

Can you actually use your gopro Hero 6 or 7 While Capturing Video?

After using multiple chargers on several models of Gopro its shows that while the cameras are in Record mode…. there is no charge  on the battery, rather it drains, so beware of that you are better using an 5V 2A external power source like a gopro power bank

Basically, like a cellphone being plugged into a power source you can actually make calls, record video or send text while charging your phone, even if your mobile phone is set to USB data mode. But this is not the case in gopro Hero 6 and 7

You cannot charge and record with your gopro simultaneously if you’re using the USB port on a computer i.e. your gopro is set to usb mode.

But if you are using wall charger, When recording you are actually drawing power from the mains while the battery sits ideal.

This is kind of weird considering the price you pay for the camera, but its a fact that gopro 7 utilizes the external power to record when plugged in and bypasses the battery when you are recording simultaneously

My test on several gopro models, shows that the batteries rather deplete when hooked up to a constant 5V 2A power supply, recording a timelapse – sometimes my gopro displays 3% battery life from a fully charged battery.

This shows that they aren’t capable of charging batteries while recording.

But there is a catch

Neither the Gopro Hero 6 nor 7 will work reliably with a Remote while charging, you will lose wireless connection to a Smart Remote when charging, so when you are using a Smart Remote run on batteries. You can get some reliable batteries and charging packs here on amazon. I highly recommend this 1480mah Replacement Batteries by Artman 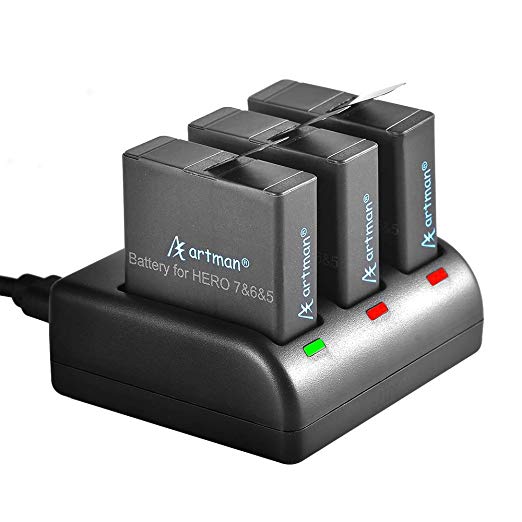 It’s best to take the battery out to prevent overheating. When your Gopro gets too hot you run the risk of frying the component or the Gopro Shutting down while recording abruptly.